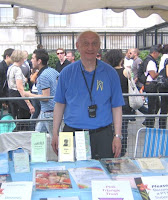 I’ve been looking at some footage of the new Mayor of London (see below), who’s had something of a mixed reception by gays, but mainly good, I think. I still can’t get out of my mind images of the blond floppy mop responding blondly and floppily to questions from whoever was “in the chair” on Have I Got News For You, the excellent satirical quiz. He was always value for money.

Oddly enough, as my fellow blogger Roy Saich (pictured, in Pride of place) said a couple of days ago, “Gays of a certain age may be amazed to have lived to see a Conservative leader of the government of London leading a march of gays wearing a pink hat.”

Well, you might respond that it’s not just a Conservative leader: it’s Boris. Either way, you would never in a million years have conceived of its happening in the Thatcher years, or even early in the Blair years.

Anyway, the PTT were well represented at last Saturday’s Pride in London, where they set up a stall staffed by Roy, who’s a trustee, along with fellow trustee and partner George Broadhead. They were handing out the Trust's leaflets on Humanism, people in the Humanist tradition such as Epicurus, Robert Ingersoll and Thomas Paine, and the pagan origins of Christmas and Easter. Also displayed were copies of Gay & Lesbian Humanist, published by the PTT, brochures on its “Humanist Ceremony of Love and Commitment”, and International Humanist News.

“A great deal of interest was shown by the many Pride participants,” George tells me, “and, despite noises off from the very loud music, some lively discussions were held.”

George and Roy also represented the Trust at the Mayor's Pride London Reception held at City Hall, when floppily blond Boris was the main speaker. "I thought Boris did very well,” says George, “and was a refreshing change from Ken Livingstone, who badly blotted his copy book by warmly welcoming that frightful homophobic Islamic cleric Yusuf al-Qaradawi." (See this GALHA briefing on that.)

And you can see Boris Johnson in action in the video below.

Tell others about us

Gay or straight, why not join our discussion list?

The owners of this blog, the UK gay Humanist charity the Pink Triangle Trust (PTT), has launched a new online magazine, The Pink Humanist.

The magazine is aimed, as the title suggests, at humanists who are gay or gay-friendly.

See this blog's announcement of it here.

All archive issues are still available online, and can be accessed from this link or by clicking on the logo above.

The views and opinions expressed here are not necessarily those of the Pink Triangle Trust, and are not to be construed as in any way indicative of the Trust's views or policies.

Individual contributors are encouraged to express their opinions, and these should not necessarily be construed as the opinions of other contributors.

One vehicle for this purpose is the online Gay & Lesbian Humanist magazine.

See also Humanists Realm, the free, independent and impartial website for agnostics, atheists and enquirers about the Humanist ethical tradition.

This blog will feature news of relevant issues, with or without comment from the author, and hopes to generate lively discussion in the comments area. For more on the blog, see the “Welcome” post from March 2008.

Scroll down the sidebar for headlines, links, categories and archives.

Our commenting terms
When leaving comments, please keep in mind the following, which you will also find above the comments area.

We welcome lively and challenging comments. However, please try to stay on topic, be polite and do not use abusive, racist or sexist language, and do not incite your readers to violence or other antisocial behaviour, or your comment will be deleted.

We do not bar anonymous comments at the moment, but we would prefer that those commenting play fair and used their name or at least a regular nom de plume. It does show a confidence in your convictions. We know, too, that it's easy to use a false name and be effectively anonymous, but, again, we appeal to your sense of good practice. Even a wacky nom de plume is better, since at least readers will come to know that contributor and maybe remember her or his previous comments.

Blatant commercial advertising will be removed.

Comments should not be construed as necessarily the policy or opinion of the Pink Triangle Trust.

we are in
Britaine.co.uk
united kingdom's search engine