Could the next Doctor Who be gay?

Sounds like a tabloid headline, doesn’t it? But could it be true? Well, to be more accurate and less sensational:

Could the next actor to play Doctor Who be gay? 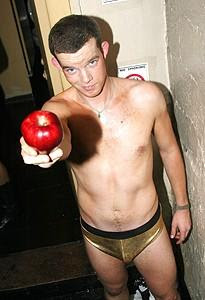 This week saw the publication of Doctor Who: The Writer’s Tale – essentially, a chronicle of a year-long interview (via email) between Russell T Davies and Benjamin Cook. Much of the press reaction to the book has centred on a suggestion from Davies that Russell Tovey (left) would make a suitable replacement Doctor when David Tennant decides to hang up his multicoloured scarf. Tovey, who came to prominence as Rudge in Alan Bennett’s The History Boys, is openly gay. And, yes, it would be great to have an openly gay actor playing such a popular and iconic part.

But what about the naysayers?

Ever since the BBC brought back Doctor Who in 2005, malcontents and other bigoted saddos have accused the show’s outgoing head writer, Davies, of having some sort of gay agenda, presumably because he created a Channel 4 drama – Queer As Folk – about gay men in Manchester!

Their evidence of gay mis-goings on in Doctor Who? Well, every once in a while, there’s a passing reference to a character being gay, or possibly being gay.

It happened in Series 1, with the introduction of one of the Doctor's companions, Captain Jack Harkness – an “omnisexual” Time Agent from the 51st century – played by John Barrowman, who is himself (horror of horrors!) an openly gay man.

It happened again in Series 2, when Tommy (Rory Jennings) – the teenager who might be gay – helped out the Doctor while Rose was "off her face".

Then it happened in Series 3, when we met briefly a couple of dear old ladies – from the year 5 billion – who’d been “an item” for many years, and again when the Doctor made some quip to Frank – a young man from 1930’s New York, played by Andrew Garfield – about kissing him later.

Series 4 wasn’t immune either, with a minor Maurice-type subplot in a story about a unicorn, a giant wasp-like alien, Agatha Christie and a joke about a bottle of ginger beer!

These idiots also cite as evidence that Davies has cast lots of dishy young men in the show. Furthermore, now that Steven Moffat is to take over as head writer for Series 5 in 2010, they believe that the gay agenda will be no more.

The Doctor snogged every one of his female companions and most of them, Rose Tyler, Martha Jones and Sarah Jane Smith, were in love with him. What about the tear-jerking end to Series 2, when Rose was banished for ever to a parallel universe. And then, at the end of Series 4, she and the human version of the Doctor went off together hand in hand. Doesn't look much like a gay agenda to me! Where's the male companion falling in love with the Doctor?

Forget all those straight characters and straight relationships in the show. Forget the fact that the programme’s also full of older men, young women and older women. Ignore the fact that much of the character profile of Captain Jack was developed by Steven Moffat – a straight man with a wife and children.

If this was the gay agenda, I can't wait for the straight one because, by those standards, it's going to be wall-to-wall male companions snogging the Doctor, falling in love with the Doctor, walking off into the sunset with the Doctor!

May the Gods of Ragnarok preserve us!
_________
UPDATE: I can’t believe I said “when David Tennant decides to hang up his multicoloured scarf”. It’s the sort of thing lazy journalists say. Tom Baker was the only Doctor Who to wear such a garment, and he left the show nearly 30 years ago!
by Dean Braithwaite Posted 8:52 pm

Although it has been refreshing to see The Doctor grow up and be more accepting of relationships in general, I did at times feel in Torchwood sometimes did the gay thing at the expense of the plot. As much as I accept Captain Jack is a sexually charged character and this needs to be shown it did occasionally seem superfluous to the storyline. Particularly with James Marsters or maybe I am just jealous.

Jack Harkness is a male companion who fell in love with the Doctor. And it caused some wonderful tension between him and Ianto Jones in Torchwood.

Tell others about us

Gay or straight, why not join our discussion list?

The owners of this blog, the UK gay Humanist charity the Pink Triangle Trust (PTT), has launched a new online magazine, The Pink Humanist.

The magazine is aimed, as the title suggests, at humanists who are gay or gay-friendly.

See this blog's announcement of it here.

All archive issues are still available online, and can be accessed from this link or by clicking on the logo above.

The views and opinions expressed here are not necessarily those of the Pink Triangle Trust, and are not to be construed as in any way indicative of the Trust's views or policies.

Individual contributors are encouraged to express their opinions, and these should not necessarily be construed as the opinions of other contributors.

One vehicle for this purpose is the online Gay & Lesbian Humanist magazine.

See also Humanists Realm, the free, independent and impartial website for agnostics, atheists and enquirers about the Humanist ethical tradition.

This blog will feature news of relevant issues, with or without comment from the author, and hopes to generate lively discussion in the comments area. For more on the blog, see the “Welcome” post from March 2008.

Scroll down the sidebar for headlines, links, categories and archives.

Our commenting terms
When leaving comments, please keep in mind the following, which you will also find above the comments area.

We welcome lively and challenging comments. However, please try to stay on topic, be polite and do not use abusive, racist or sexist language, and do not incite your readers to violence or other antisocial behaviour, or your comment will be deleted.

We do not bar anonymous comments at the moment, but we would prefer that those commenting play fair and used their name or at least a regular nom de plume. It does show a confidence in your convictions. We know, too, that it's easy to use a false name and be effectively anonymous, but, again, we appeal to your sense of good practice. Even a wacky nom de plume is better, since at least readers will come to know that contributor and maybe remember her or his previous comments.

Blatant commercial advertising will be removed.

Comments should not be construed as necessarily the policy or opinion of the Pink Triangle Trust.

we are in
Britaine.co.uk
united kingdom's search engine